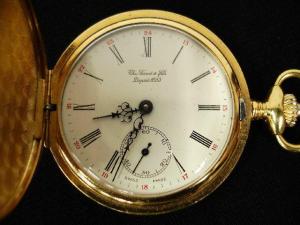 As of this moment, my third daughter is in with her OB checking on her health and the health of a granddaughter I have not met yet. Her husband, my son-in-law went to jail today. I’m glad he did. It was his first day in his career as a Deputy Sheriff/Corrections Officer! Earlier today, I had a conversation with a fellow who, following in his grandfathers, fathers and uncle’s footsteps, he collects toy trains. He pays top dollar for toy train sets that used to circle every Christmas tree or glimmer in the hopes of little boys as they decided what Lionel train they wanted for themselves. Yet, he worries because as collectable as the old trains are, there is a growing fear among collectors that if the interest does not re-emerge for the small gauge track with the real looking train cars, they will be stuck with thousands of miles of track that lead nowhere.

Then there was a conversation I had over the weekend with a man who buys up old “Ham” radio equipment, not so much for re-furbishing because with the new digital markets the newer radios are smaller, lighter, cheaper, better sound, overall quality and focus on replacement not repair. So why buy up the old stuff? A sense of nostalgia for when times were, in B.C. terminology (before computers) slower, calmer, and even quieter brings those who remember those times looking for a connection to the past. There were times when people on “Ham” radio would Ragchew – in fact, yours truly has a certificate to show that I am a bona-fide ‘Ragchewer’. To prevent questions of my oral hygiene, I’ll explain that to ragchew means to spend time on the radio talking for fairly lengthy periods to someone they do not know, who they will probably never meet and may never talk to again. So taken were they with their long conversations about practically anything and most often nothing at all, that they would exchange post cards, called QSL cards – QSL being the abbreviated Morse Code for ‘confirm contact.’ They usually include the date and time of the conversation, which is recorded for posterity!    The card to the right is an example, showing the author hard at work. 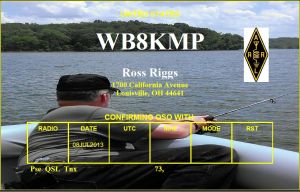 What has become of those who build a small city with mountains and tunnels, with curves and bends that bring the roaring train across the plywood over top of the billiard table which was used for at least two weeks after the Christmas it was dragged into the house, but now proudly holds the Lionel set including the water tower and depot? Where are the all-night ragchewers that are also running phone-patch traffic for maritime mobiles (ships at sea) or missionaries in the heart of the Amazon, even for scientific expeditions at South America?

The phone patch traffic has gone the way of the local telephone operator with the advent of cellular phones, sat-phones, internet and SKYPE. Most “Hams” these days are techies that work only 2 meters or 440 MHz on repeater systems. Thankfully many are volunteering on Tornado Spotter teams and rescue and emergency communications back-up. Now the all-nighter is spent on FACEBOOK or IM-ing someone with texts about the steak they had for dinner. Sure, I know that ragchewing conversations were never going to be the upcoming agenda for MENSA discussions but, come-on… rather than go to some recent FACEBOOK or texting sites; I can get a more intelligent conversation on a Saturday night at Wal-Mart with the unarmed manikin that doubles as a security camera!

The leisure time activities of old have been replaced by twenty-four hour news, text alerts for whatever style of news you desire, computer games that will allow you to land on Mars in virtual reality or draw down on Zombies that are dragging their way across your 87 inch plasma screen with surround-sound so realistic the neighbors have called the cops twice thinking there was a real gun battle at your house and your closest neighbor is two farms down the road about three-quarters of a mile! This is quite different than the good ol’ days of uncle and nephew leaning into the crackling noise of the speaker to try to make out the call sign of that maritime mobile that was looking for a phone patch into Ohio. Gone are the days when, just before the ‘test pattern’ came on to the black and white TV screen there was the footage of a fluttering American flag and background music playing the Star Spangled Banner as the station signed-off for the night. It was night, time for rest to not be haunted by the cable news network talking heads going over the same discussion they have continued nightly for more than a week!

Oh, yes; I love to be able to pull out my Droid phone and check email as I wait for the plane to take-off or jump on to FACEBOOK and see my grandchildren’s most recent pictures. And at home… the Night Before Christmas might end up re-written “And mother on FACEBOOK and me with my Kindle, had just checked out a NETFLIX film about reindeer…” As much as the nostalgia side of my brain yearns for the simpler, quieter times; I love the electronic toys, the ease of communicating and the instant everything that the Internet brings. So what is the answer to the conundrum?

It must, and I would underscore must come down to Psalm 46:10, “Be still and know that I am God.” If ever there was a time in our world’s history that people must be admonished to “Be still” it is now. The whirling sounds of computer fans, the clacking of keyboards, the incessant ringing of the cellular phones all bring a cacophony of noise that can drown out the soft sounds of the Holy Spirit directing your heart. So how do we find that delicate balance between the quiet space with the Spirit and thriving in a breakneck paced world that can be exciting and full of great things?

The answer lies in the remainder of verse ten of Psalm forty-six. God states, “I will be exalted above the nations, I will be exalted above the earth.” If we truly allow ourselves to see God as higher than any President or King; if we truly see Him as above anything in nature, we will find a way to give Him the time  due to Him. I dislike using the following example but let us assume for this one analogy that ,whoever is the President of the United States at the time this happens is THE one President in all history, or yet to come, that you would like to talk to… If the President of the United States calls you and says, “It is very important that we meet every morning for the next two weeks for about thirty minutes each morning…” Chances are you or I would move everything else off our schedules to make certain we were free for that time period. Well, the Sovereign God, Creator and Master of the Universe has told you that He desires to have that thirty minutes with you every morning for the next two weeks (as a start). Will you being willing to at least put down your sports section of the newspaper or turn off Fox and Friends for thirty minutes for the Master Ruler of the Universe?

The best part about ‘giving up’ time like that for God is that YOU are the one that will receive the blessing for it. You will come away refreshed, encouraged, and yes, even the rest of your day will change because you took the opportunity to spend quality time with God.

Someone mentioned to me that, they agree with taking the time with God but, they have their devotional material on their computer. Well, if that is where you want to start reading it, Okay; but after you have read it, switch that screen off and let the Holy Spirit talk to your spirit for the rest of the time. You won’t regret it and, believe it or not, the computer switch will allow you to turn it back on again when you need it.

“Be still and know that I am God. I will be exalted above the nations. I will be exalted above earth.” – Not enough ‘time’ to get quiet with God? The One who created Time, will give you all you need. If you cannot find a way to set the time aside yourself, God may do it for you and it may not really be ‘convenient’ if He has to choose what will make you slow down and listen.