When someone is an enemy of America because they hold to an ideology that calls for the killing of our soldiers, our cops, our citizens then that person is our enemy and we have every right to call them on it,

A very short time ago, I prepared a new post for the Security Consulting Investigations, LLC Facebook page: www.facebook.com/SecCon1 and its sister page First Defense which is at www.facebook.com/DEFcon360 using a tool for passing along bits of information to help citizens better understand our world. It plays off my company’s initials and logo and is titled: InSCIghts. This particular one is about a 20-year-old young man from West Chester, Ohio a suburb of Cincinnati which lays along the I75 corridor that runs all kinds of illicit traffic from Miami to Detroit and back whether it be drugs or children or adults. The Cincinnati news video that is linked in my post uses the information that the young man’s mom had hoped he would go to work for the local Proctor & Gamble but instead he chose ISIS. And choose it, he did. The twenty-month federal investigation gathered evidence that Munir Abdulkader purchased an AK-47, a Russian designed semi-auto and automatic rifle that shoots 7.62x39mm shells. The gun is affectionately called the Kalash after its designer, Mikhail Kalashnikov.

It has been an effective weapon used by many nations since its 1947 advent. I want you to understand something specific here. A teenager in America may often own, as a gift from family, a 410 shotgun or even a 20 or 12 gauge shotgun for rabbit or deer hunting; perhaps even a .22 caliber rifle or handgun for plinking targets. A teen or a 20-year-old does not buy, for fun, an AK-47, particularly one modified to fully automatic. I do not know if Abdulkader’s was so modified, even so, he cannot legally purchase one and I doubt his mother gave it to him as a gift.

Testimony indicated that Abdulkader planned to find, locally, an American soldier, cut his head off and film himself doing so. He then planned to ambush Cincinnati police when they responded to the incident. His life goal was to support ISIS and wage his own form of jihad in his own country, the United States of America.

There are two very critical points here. First, if this can happen in West Chester, Ohio; it can happen wherever you live.

The second point derives from two comments. One made about Abdulkader was that ‘social media encouraged Abdulkader’s radicalization and it facilitated it.’ That may well be true… however, go back to the news story title: “He chose ISIS” – No one on any social media site forced him to plan what he planned; that needs to be clear. This was his choice.

The second comment that feeds into my second point came not from this story but a response someone made to a story of mine earlier this week about the intelligence gathering process and information that came through to be accurate about ISIS wanting people to take a motor vehicle and, as was done in Europe, use it to drive into crowds of people around the Thanksgiving Day celebrations in the U.S. One such ISIS fanatic did that at The Ohio State University on their first day back to school after Thanksgiving break and the OSU win over Michigan. An OSU police officer shot and killed the would-be killer. The comment that was forth-coming was that we must not see religion, race etc. as the enemy. The inference being that, if, while doing intelligence gathering when looking for someone who might plot a terrorist attack against the United States; the analysts pay attention to those of Islamic background and/or Middle East roots since that is where the threats are from and since the  majority of the terrorists attacks against the United States in the last two decades have been by persons fitting those descriptions, then the analyst is somehow wrong because he is driven by his prejudice!

There is an old saying that: if it looks like a duck, if it walks like a duck and if it quacks like a duck… it’s a duck. Many in America and elsewhere work very hard at making our society the one to be at fault. That somehow, all of us regular American citizens going about our everyday lives, are somehow creating the social atmosphere that pushes individuals like this 20-year-old to lash out at us. That, if we criticize a religion that openly calls for attacks against the U.S., we say well, it is only some of them who say that or sure, maybe that is what their tradition teaches but, it is not what they really mean…

Now before you go off and say what an Islamophobe I am or how prejudice, you best take care to look into my background, my work over the last fifteen years, and learn about the love I have for some young men who are, all but one, Muslim. (The other is Serbian) These folks I know and love are just human beings trying to get through another day. They do not practice the strict tenets that is espoused by the Imams in the mosque in their neighborhood. Still, that violence is central to what is taught as Allah’s will. Since when can we not look at an ideology and call it what it is: the tools of our enemy? When someone decides to sit under that type of teaching and then decides to act on what he has been taught, it is his responsibility and it is his actions that make him our enemy; not our feelings about his religion. That stuff is right off the stable floor. The incident in London is an example: 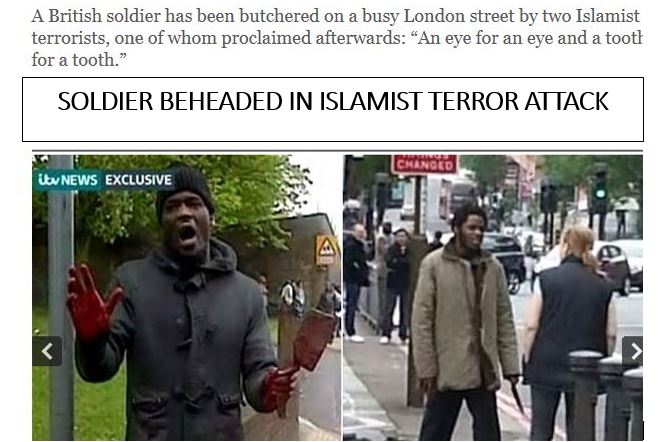 Did we go to war against all of Germany in WWII? Yes. Were the real culprits in the war the Nazis? Yes, again. If someone held to the Nazi ideology did we label that person an enemy of America? The answer is Yes. If it walks like a storm-trooper… We weren’t concerned about disrespecting his beliefs!

When people who mean well delude themselves into thinking that somehow its our fault that these evil people act the way they do then the logic of that argument lays the fault of the Holocaust at the feet of the German Jews. When someone is an enemy of America because they hold to an ideology that calls for the killing of our soldiers, our cops, our citizens then that person is our enemy and we have every right to call them on it, to watch them, to track them, to catch them before they kill. To blame society is to make it possible that no one is responsible and to try to handcuff the cops, the intelligence analysts, the covert operatives, the military by saying… Okay, you have to do whatever you can to make sure we all stay safe but we don’t want you taking a second look at these people because of their background and you can’t consider these people suspicious because they frequent these places or these websites and chat rooms… then, when some of those same folks are entering your store with a machete headed for the young soldier sitting at the counter, you may as well be holding the soldier down for them’ because that is what such placating, politically correct, pontificating is doing.