Behold, an angel of the Lord appeared to Joseph in the dream saying, “Arise and take the Child and His mother, and flee to Egypt and remain there until I tell you; for Herod is going to search for the Child to destroy Him. (Matthew 2:13 NASB)

“Now Joseph had been taken down to Egypt… and the Lord was with Joseph… But Joseph said to them, do not be afraid, for am I in God’s place? And as for you, you meant evil against me, but God meant it for good in order to bring about this present result, to preserve many people alive.” (Genesis 39:1, 50:19-20
NASB) 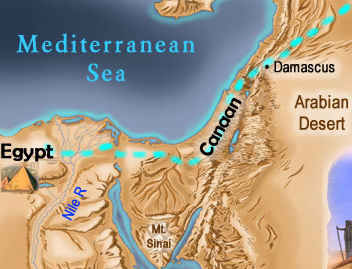 The route of Abraham’s travels in ancient times would have been nearly identical to the traders’ route that those who purchased Joseph would take to Egypt and later Joseph’s brothers and family would eventually take to Cairo. Centuries later, Joseph, step-father of Jesus, would take the same route when fleeing Herod in Jerusalem.
The point marked on this map with a is the location of current day Bir al-Abed. (See map later in this monograph).

Joseph, the great-grandson of Abraham was taken to Egypt and lived there around 2900 BC. (The Exodus under Moses took place about 2450 BC and King David ruled in Jerusalem 1003 to 970 BC)

Archaeologists believe that a massive volcanic eruption followed by a tsunami of epic proportions wiped out the coastal cities of Sinai in 1500 BC. This would have been during the years of the Judges before the reign of King David. A city in the location of Bir al-Abed during the travels of Joseph and his family would have been destroyed and then, perhaps, rebuilt by the time that Joseph, Mary’s husband would have brought the Messiah to Egypt in the 1st Century AD.

In the 7th Century A.D., Islam began to grow in the areas of Mecca and Medina in the area today known as Saudi Arabia. In the years following Mohammad, Islam spread west along the northern shores of Africa in a bloody campaign by those loyal to Mohammad.

On Friday November 24, 2017 Terrorists attacked the Al Rawda Mosque in Bir al-Abed in northern Sinai. Though not yet claimed, as of this writing, likely the local Islamic State of ISIS is responsible for the attack that killed 235 with more than 100 wounded. Sources claim “it was the worst terrorist attack on civilians in modern Egyptian history. It was well-planned, highly coordinated and aimed at slaughtering as many people as possible.” 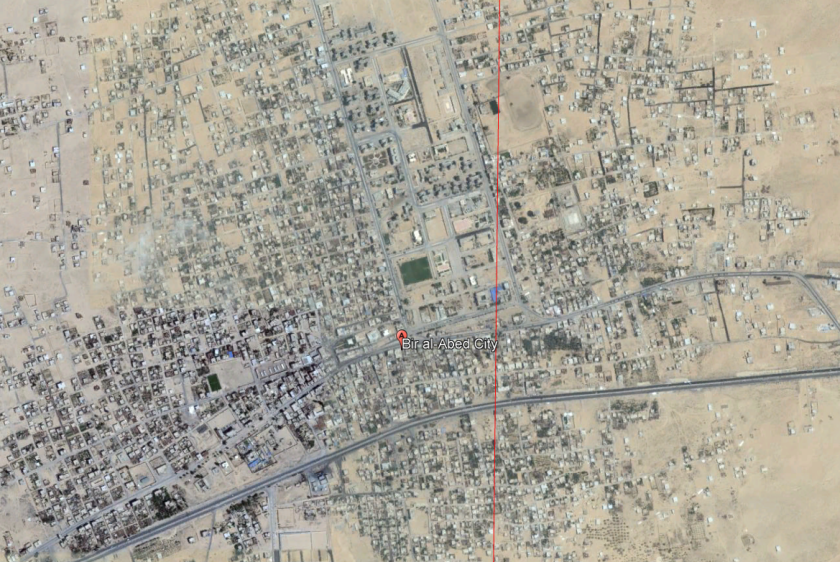 Al Rawda (also spelled in some sources, Al Rouda) is a Sufi mosque, a branch of Islam known for its mystic ways that involve chanting and enchantments meant to draw worshippers closer to a spiritual awareness. Many of the worshippers in Bir al-Abed are workers in a local salt mine.

Egyptian President Abdel-Fattah el-Sissi vowed that the attack “will not go unpunished” and that Egypt would persevere with its war on terrorism. But he did not specify what new steps might be taken. U.S. President Trump took to his Twitter account and called the crisis a horrible and cowardly terrorist attack on innocent and defenseless worshippers. The world cannot tolerate terrorism” he said on Twitter, “we must defeat them militarily and discredit the extremist ideology that forms the basis of their existence!”

According to sources, the terrorists approached the mosque in four off-road vehicles with at least a dozen terrorists entering the mosque where hundreds were gathered. Very likely they approached the city along highway 40, the same road that had carried travelers and tradesmen and in the centuries before the destruction by a massive volcano and tsunami may have carried the 17-year-old prisoner Joseph who would one-day rule Egypt and generations before that the caravan of his great-grandfather Abraham. That same road carried the body of Joseph’s father, Jacob, back to the Promised Land in a great procession, where he would be buried. Jacob’s directions for his burial are recorded in Genesis 49:30-32.

Over four-hundred years later, when Moses was bringing the nation of Israel, now millions strong back to the Promised Land they would be carrying the bones of Joseph only for another Joseph to travel that way again to bring his wife and toddler step-son, baby Jesus, the Messiah to Egypt for safety.
Jesus Christ, by this time a young boy, after the death of Herod, would have passed along this same area again, returning to Israel perhaps even staying the night in a town on or near the site of Bir al-Abed.

On this Friday in November, just a few weeks before the Christian world celebrates the nativity of our Savior Jesus Christ, terrorists used the this non-descript road in the desert to bring about carnage, bloodshed, tears, pain and death.

They were firing rocket propelled grenades and firing indiscriminately into the crowd. One boy of 14 who had shrapnel and a bullet wound described the carnage. He said “I saw many people on the floor, many dead. I don’t think anyone survived,” he said at a hospital in the Suez Canal city of Ismailia, where around 40 of the wounded were taken, including many children.

The Egyptian army has been battling ISIS-linked militant Islamists in the Sinai four years with limited success. But if the world knows little about this fierce ongoing struggle, that is no accident. The Egyptian government has imposed an almost total media blackout on its efforts to repress what is becoming a deeply embedded insurgency 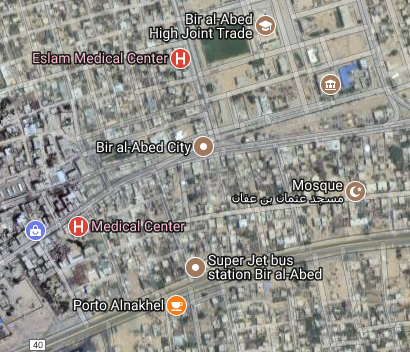 Egyptian president al-Sisi claimed that “the attack would only “add to our insistence” on combatting extremists. Addressing the nation later on television, he said Egypt is waging a battle against militancy on behalf of the rest of the world, a declaration he has often made in seeking international support for the fight.”

Egyptian president Abdul Fattah al-Sisi went on Egyptian television Friday evening to declare three days of mourning and denounce the attack, which he called the work of cowards. He vowed to respond with air strikes and “brutal force.” 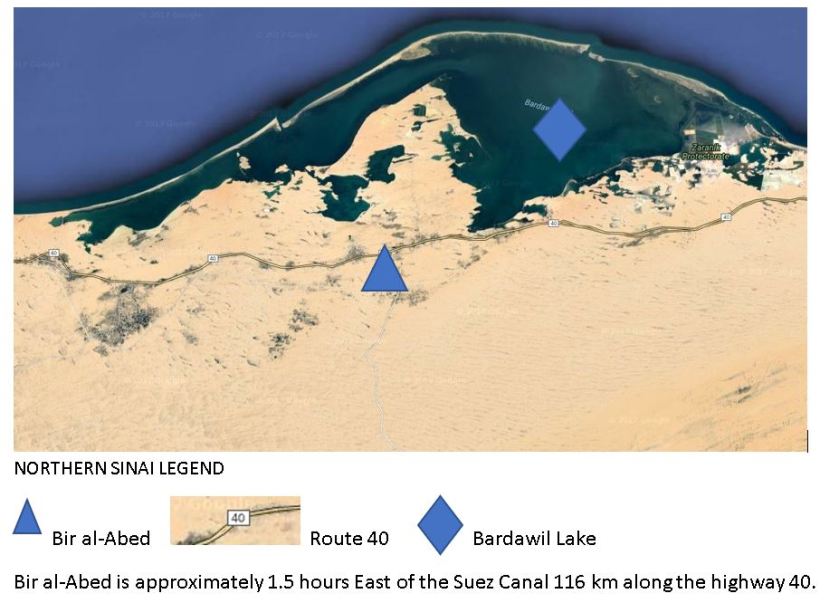 But the use of such brutal force, which critics say is also indiscriminate, has created greater resentment among Sinai residents. It has also radicalized the local population and generated new recruits for the terrorists – even as most Egyptians reacted with shock and outrage to the assault on a holy mosque during the Muslim day of prayer, a rarity in the deeply religious country.

While no group immediately claimed credit for the attack on the Al Rawda mosque in the town of Bir al-Abed in northern Sinai, the culprits were almost surely the local branch of ISIS, also known as the Islamic State.

It is just a road in the desert, probably the current-day road is one with a heritage that is as old as civilization itself. It has witnessed the dawn of mankind’s growth as a people of the One Creator God, the historic events that took place across it and it witnessed the sons of Abraham trying to survive horrific draught and famine. It witnessed the funeral processions of patriarchs of the Christian faith and the escape and return of the Messiah from Israel to Egypt and the fulfillment of prophecy, “Out of Egypt I have called my Son.”

This map shows that simple road. Notice the red color, the subscript of the source just says, “Travel Not Recommended.” So, when one wants to plot their travel from Cairo to Tel Aviv or Jerusalem, there is a bit of a side-trip. That side trip is shown in the next map. 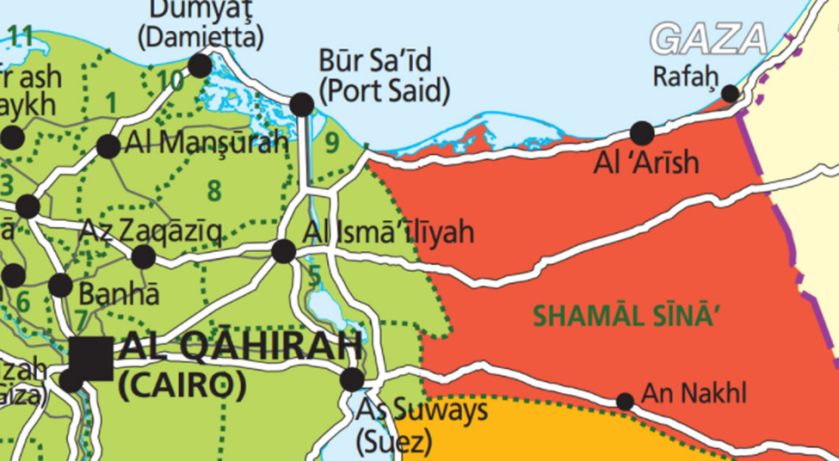 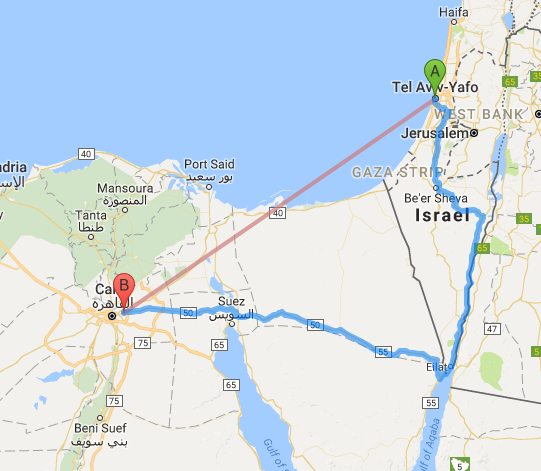 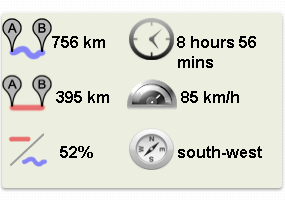 You will notice a red line and a blue one. One is the distance to go directly from Cairo to Tel Aviv. The direct route is 395 km and if you travel at 85 km/h it will take you just under 5 hours, depending, of course on how well you swim; so you may want to add some time if you choose to stay on dry land. Because of the violence, however, you will likely have to take the more circuitous route which will take you 9 hours to travel the 756 km. Sounds like the same kind of problem Moses had getting to Israel from Egypt!
There could be close to 300 people dead, men, mostly salt mine workers, women and children all who practice a strange cult version of Islam dead for no other reason than a group of another cult find their worship untenable.

The terrorist lives to strike fear into the hearts of those who just want to live out their lives in relative peace. When Christ returns there will be a time of tribulation on the earth with its purpose to bring back to the faith those who have run away from God, chasing false teachings and empty promises of peace. The violence earlier today was there just for the sake of indulging in terror.

God save us from ourselves and walk beside us along a little-known road in the desert.