With great freedom, such as the First Amendment, comes great responsibility.

What is meant by the phrase used in law enforcement and legal parlance, to aid and abet? Most often the term is attached to criminal charges levied at a person or organization who, although they did not take part in the actual crime, without their assistance in the planning or facilitation thereof, the crime could not have been committed. A similar terminology is linked with the crime of treason against the United States. In that statute, it is part of the crime of treason to give aid or comfort to an enemy of the United States. In both cases, it is an element of the crime that a person or organization provided aid to a specific person or entity who is (as for the crime of treason) an enemy of the United States. There could be, as we will see in this example, the need to show a cause and effect. Action A took place because there was an opportunity provided, which would not have been available otherwise, if Aid B was not given. That will become clearer in a moment.

It is important to be clear, here. SCI, its counterparts and individual personnel have the utmost regard for the U.S. Constitution and the Bill of Rights. We support, without reservation, the First Amendment which permits the exercise of free speech for individuals and the press. That free speech is not unlimited, however. Just as the adage explains, your right to swing your fist ends where my nose begins! The right to free speech is limited; not allowing persons to incite violence. It cannot be used to make a threat or to promote the overthrow of the government.

Again, let’s be clear. SCI is not about to say that the Women’s March on Washington was advocating the overthrow of the government. However, there are multiple groups, both inside the U.S. and without, who would like nothing better than to see the United States government crumble to the ground. Is there a possibility that specific individuals, particularly George Soros, paid for the March to create an opportunity for America’s enemies? Could his financial support for the March have created such an opportunity even if he was acting unwittingly? Let’s look at the facts.

Ø  January 21 – Women’s March on Washington, estimated 500,000 protesters marched in the Nation’s Capital (with over 1.3 million estimated marched across the United States), and another 3,200,000 marched across the world to promote women’s rights, immigration reform, and LGBTQ rights, and to address racial inequities, worker’s issues, and environmental issues. This marks the protest as the largest combined protest across the United States…

Ø  In attendance: 485,000+ Participants according to news estimates in Washington D.C.

Ø  The website for the March stated, “we have over 1000 trained marshals in place to help maintain order and to provide direction to marchers.”

Ø  Regardless of such a plan, authorities from the U.S. Capital Police, the U.S. Park Police, and the Washington D.C. Metropolitan Police all had thousands of extra officers working, as well as, regular units tied up unable to respond to other emergency calls for service.

Asra Q. Nomani writing for the NY Times gave background information on the nature of the March and on the role that George Soros played in orchestrating it. A review of her comments will make clear a possible motivation for Soros, besides just irritating President Trump.

“I sought input regarding the Women’s March on Washington, where no one seemed to have a clear objective about what specific women’s rights they were protesting for in the crowd that I interviewed…”

“The Soros people brought in protesters from all over the country to express their displeasure with Donald Trump on his first full day as president of the United States. These left-wingers don’t accept the votes of the 63 million Americans in 3,084 of the nation’s 3,141 counties or county equivalents who chose Trump as president. They keep telling themselves the lie over and over again that Trump is somehow not a legitimate president even though he received a majority of Electoral College votes, as the Constitution requires.”

Nomani concluded, “the march really isn’t a ‘women’s march.’ It’s a march for women who are anti-Trump.”   She found that Soros has close relationships with, at least 56 of the march’s ‘partners,’ including ‘key partners’ Planned Parenthood, which opposes Trump’s anti-abortion policy, and the National Resource Defense Council, which opposes Trump’s environmental policies…” (USA9) 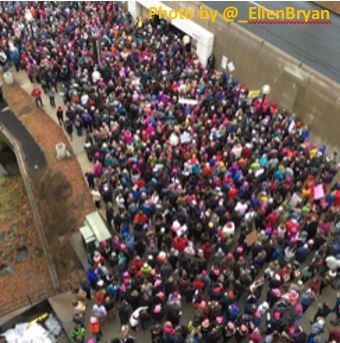 What if…  What if the March tied up so many security forces and law enforcement personnel that it was a perfect opportunity for a terrorist strike? According to a local news article in Washington D.C., the

mayor’s personal security for one year, one person, costs taxpayers $1M. What do you think the cost of the March was to tax payers? The numbers and the costs are still being crunched as of the writing of this brief, but I can tell you now, it waylaid thousands of cops who should have been doing something better and it cost you and me millions of dollars. Maybe George Soros will foot the bill for that too!

Thank God, nothing, as we have mentioned here, did happen as far as an attack against the U.S. In our thinking, the terrorists missed an amazing opportunity provided for them by Mr. Soros.

It is my belief that, if something would have happened and it could be shown that there was a proximate cause relationship between the terrorist attack and the opportunity provided by the March; then people who funded it, like Soros should be held criminally liable and serious consideration be given for charging those persons with the crime of treason for providing aid to our enemy.

That same expectation should also be applied to the media who spent such an inordinate amount of time covering the March. Not only did the media’s coverage overshadow the coverage they gave to the inauguration; it was very likely the cause for the spin-off marches in other cities and for enticing others to come to D.C. to take part in the March. Again, the airtime numbers are still be tabulated but it will certainly be an amazing amount.

With great freedom, such as the First Amendment, comes great responsibility.

For now, such thoughts are mere intellectual debate but… rue the day, dear citizens, rue the day.