It is no longer a question, in today’s society, whether or not something is immoral. We live in a society that isn’t just amoral, there are no moral standards legitimately applied to our culture. There is no room in today’s society for a proper definition of right and wrong. Nothing is black and white but various shades of grey. Some would say as many as fifty. In the 2011 novel and 2015 movie, Fifty Shades of Grey, audiences were introduced to the vividly erotic scenes of BDSM[i] and according to IMDb the Motion Picture rating those scenes earned only an ‘R’ – under 17 requires accompanying parent or adult guardian. The movie boasts a 4.1-star rating (out of 5) on the IMDb site. In the 1970 movie, M*A*S*H, which was irreverent and had what today would be considered mild sexual content, (now available on regular TV channels), was also rated ‘R’. In 1970, the movie theater staff would check i.d.’s for anyone who did not look 17.

We have become numb to the continuing decaying of our society into a debauchery perhaps equaled only by Sodom of ancient Arabia. In the television series of M*A*S*H, Alan Alda plays Capt. Hawkeye Pierce. In one particular episode, he bemoans the fact that everyone around them in the camp was numb to their surroundings. He bet his tent-mate, that he could walk into the mess tent naked and no one would notice. For several minutes he is correct until, embarrassingly, he is finally noticed as he stood in the chow line now covered only by two meal trays. Americans, including American’s who claim to be followers of Christ, are just as effected by the de-magnetization of our moral compass. Very little shocks us anymore. This author included.

Recently, however, I was shocked by a headline and I could not believe what I read. I waited for the tidal wave of public outcry. It never came. In fact, the vast majority of Americans do not even know the story because it wasn’t newsworthy, apparently. What was it that got my attention so profoundly? Canada Legalizes Sex with Animals

I will give you a minute to let that sink in. The headline is a little misleading because it wasn’t that the legislature had created a new law making sex with the animal kingdom legal. It was a high court ruling that is so sick and twisted, it is hard to even relate. I will caution you that the facts of the case are disturbing. “The court ruled 7-1 in favor of a British Columbia man convicted of 13 counts of sexually assaulting his stepdaughters who also “smeared peanut butter on the genitals of his victims and had the family dog lick it off while he videotaped the act,” court documents revealed.”[ii]

The legal point made by the court was that the crime of bestiality is defined as sexual intercourse with an animal. That being the case, as long as there was no penetration, there was no crime!

For what response there was, the internet saw some allusions to cold winter nights and dog sled teams, but that was about it. Let’s make a joke, seemed to be the response. This is not funny.

I do agree that, sometimes, humor is a great way to bring to the fore the troublesome issues of the day. Political cartoonists have been doing so for centuries, but the end goal for the cartoonist is to evoke a response, an outcry and not just a chuckle and a flip on over to the sports page. The satirist sees the folly of society and pricks at the conscience. Maybe, instead of light satire, it is time for God’s holy wrath. Abraham bartered with God and He acquiesced to spare Sodom and Gomorrah if ten godly men could be found in the cities. They could not. The estimated population of Sodom, the larger of those two cities was estimated between 600 and 1200 based on the archeological digs and the size of the city’s walls.[iii] Hypothesizing that even if there were 2000 people in the two cities, to not find ten righteous men is extremely sad.

Today, by God’s grace and mercy, His wrath has been postponed. Perhaps, in part, because of the number of true believers who strive to live, every day as they believe God would have them.

I have quoted this passage from Peter’s first letter before but it seems it is appropriate here again today. “Humble yourself under the mighty hand of God that He may exalt you in due time.”[iv] What an awakening could occur in the U.S. and across the globe if those words would be taken to heart!

Dolly Parton, in an interview, talked about her Christian faith and that she prays every day to keep energized and that she believes in God and that Jesus is her friend.[v] Born in Sevierville, TN, she has an estimated worth of $500 million. When asked about her reaction to the Target stores bathroom controversy, she is quoted as saying, “I think everybody should be treated with respect. I don’t judge people and I try not to get too caught up in the controversy of things. I hope that everybody gets a chance to be who and what they are.”[vi] In the same article, it is reported that in 2014 she came out in support of gay marriage; joking that they should have to suffer just like the heterosexuals. Dolly Parton is not the typical Hollywood star. Her charitable works are many and she has been married to her husband, Carl Dean since 1966. The seventy-year-old is, in many ways, just what she seems; a down-home country girl.

My point is not to pick on Dolly Parton. She is, however, a very visible example of Christians in our culture who have not viewed the issues of today through the lens of scripture. Without such a view, it is impossible to keep a moral compass. If you look at all those who claim the Name of Christ yet who cannot state a biblical world-view, it becomes clear as to why there is moral decay in America today. It is time to wake up and smell the coffee. Ms. Parton (Mrs. Dean) said that she tries not to judge anybody and that is commendable. We are not to judge; but, we are to apply the clear teachings of scripture to our lives and that includes how we respond to the crisis of moral values in our culture.

Target stores touched off a firestorm of controversy by declaring that their bathrooms would be open for persons to use as they believe their gender identity to be at a given moment. In May of this year it was reported that: “The Obama administration plans to issue a type of executive order… directing every public school in the nation to allow transgender students to use the bathrooms that align with their gender identity, according to a report in the New York Times.”[vii] What exactly is meant by a “type of executive order” is unclear but what is clear is that the President knows he can by-pass Congress any time he chooses. As if the public school systems did not have enough problems already. The local control of public schools that has been so important to Americans for decades has been subverted by the acceptance of federal dollars which were tied to a great many strings. The moral decay continues and is pronounced from the top down. How long until Americans finally say, No More!?

It will be our children and our children’s children who suffer the most from our failure to act. Look closely. It is seen clearly on the faces of the step-daughters of a sick and twisted man who the Canadian Court says is not guilty! 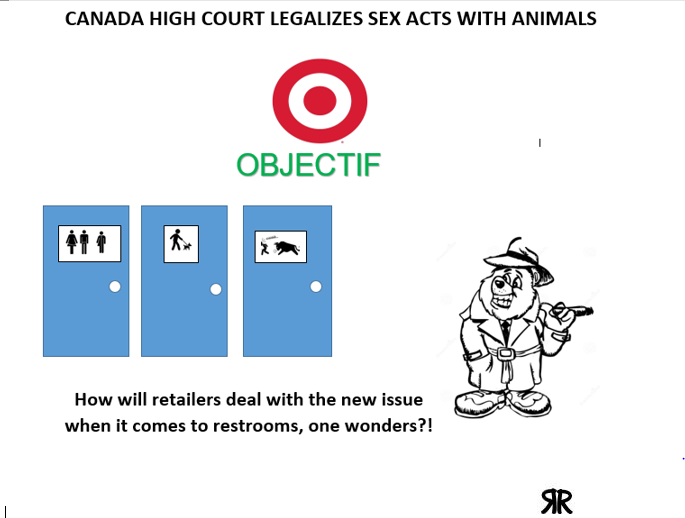