Perhaps, if we, as Americans hold the office in the esteem it deserves, then maybe, just maybe, those who hold the Office and those who seek it, will too.

In 1971 under President Richard Nixon, the federal government established the idea of moving as many federal holidays to a Monday as possible. So, rather than celebrating President Lincoln’s birthday on February 12th and  President Washington’s birthday on February 22nd, we celebrate ALL the presidents on one day, the third Monday in February. If you are my age, or a perhaps a older, you will likely remember the construction paper cutouts on the cork boards, the red cutout hearts, the black silhouette cutout of President Lincoln in one corner and one of President Washington in the other. Of course in every classroom, above the large and small letters of the alphabet, was the picture replicated below here by artist Ken Curtis. If you’re like me, you always wondered why it wasn’t finished. 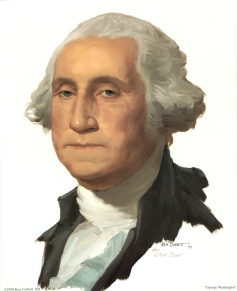 Was there a time when those two presidents, or  any of the presidents, held a more esteemed place in the minds and hearts of American citizens? Was there any time when those who held the Office of President carried with them a fuller understanding of the weight of the responsibility and the history that it contains? Is there still a sense of awe by a citizen, or better yet by a long term president,  when they enter the Oval Office? I want there to be.

A very long time ago, I had just finished my Air Force basic training. I was then assigned to the Security Police Training Squadron at Lackland AFB, literally across the street from where I had my basic training. One of my first nights out was to go to the base theater to watch whatever was the newest available movie in 1975. I will never forget what happened next. Just before the movie was to start, the American flag filled the screen and the National Anthem began. Immediately, with a thunderous sound, one hundred plus Airmen stood to the feet, at attention. A wave of goosebumps washed over me and I knew that I had become part of something special.

That feeling returns to me every time the Stars and Stripes fly and in public places, I see Americans with their hands over their hearts or rendering a hand salute. Their is a wave of emotion when I stand as a flag draped coffin moves past me or as uniformed soldiers meticulously fold a flag to present it to a veteran’s survivor.

Whenever I travel across the world and I return to home, as I walk into a U.S. airport customs area and there is a large sign  by the American flag that says, Welcome to the United States of America, I am reminded of that feeling. When a customs officer hands me my passport and says, “Welcome Home” I know I have truly come home.

In the movie, National Treasure Book of Secrets, Ben (Nicholas Cage) is face to face with the President and says, “…And because you’re the President of the United States, sir. Whether by innate character or the oath you took to defend the Constitution or the weight of history that falls upon you, I believe you to be an honorable man, sir.” The President Bruce Greenwood, says, “Gates, people don’t believe that stuff anymore.” And to the President, Gates replies: “They want to believe it.”

Whether you believe in a limited federal government and fiscal conservativeness or you believe in an expanded government with increasing social programs, you want to believe in that of which Gates spoke. If so, you are sick and tired of the fighting, backstabbing, limitless pettiness combined with gargantuan egos that have been the hallmark of the campaigns thus far.

May I suggest that on this President’s Day we continue to avoid what our forefather’s worried about, and that was the elevation of the Office of the President to royal status by remembering they are but humans? At the same time, I urges us to resolve to place on the Office the level of respect and integrity it demands. Perhaps, if we, as Americans hold the office in the esteem it deserves, then maybe, just maybe, those who hold the Office and those who seek it, will too.