Each year, at the time of the National Police Memorial Day, May 15th, first designated by President Kennedy; I attempt to write a short article to encourage those who are part of the ‘thin blue line’ and to perhaps educate or challenge those who are not.

On May 15th 126 new names will be added to the National Law Enforcement Officers Memorial in Washington D.C. Of those 126 officers killed in 2014, three of the fallen officers were female. The average age of a fallen officer was 41, with an average of 12 years of service. Each officer left behind two children on average.
A recent headline read that law enforcement officer  deaths “spiked” in 2014 compared to 2013. There is always a bit of difficulty when looking at facts over a short time frame without the context. The chart below gives a much clearer picture of the number of officers killed recently compared to the history dating back to when President Kennedy inaugurated Police Memorial Day. The early 1970’s were a very difficult time for police and handgun related shootings of officers was very high.Today’s headlines also seem to focus on the number of handgun or firearm related murders of police officers perhaps fueled by the anti-gun lobby. Of course, the bumper-sticker wisdom of “outlaw guns and only outlaws will have guns” can be applied to that type of reasoning. 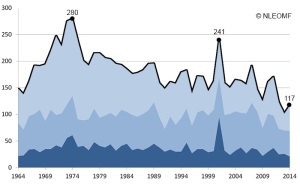 There are approximately 900,000 sworn law enforcement officers in the United States. About every 58 hours, one of them dies protecting the citizens they serve. A concerning fact is that in 2014 ambush murders of police was the most deadly form of attack. In many cases the officers had no opportunity to respond or react to their attackers. Every 58 hours or so, a department loses an officer; a husband or wife loses a spouse; a parent loses a child; children lose a mommy or daddy.
Just last week came the news of two officers killed by two ‘career criminals’ in a small town in Mississippi. Killed were  Benjamin Deen, 34, a former “Officer of the Year” in Hattiesburg and Liquori Tate, 25, who grew up in Starkville, 150 miles north of Hattiesburg. Tate was a 2014 graduate of the law enforcement academy. He was known to his friends as “CoCo,” said his stepfather, B. Lonnie Ross of Jackson, adding that Tate was 12 when they met and already wanted to be an officer.’ This young rookie gave everything he had to his calling. May their memories be honored.
This years Law Enforcement Officers Memorial Day on May 15 has a special meaning to me and my family. On May 16th my son, Daniel who is 21 will graduate from the police academy and will then be sworn in as an officer for the department from which I retired as the chief several years back. I have the honor of leading the newly graduated officers in a ceremonial reading of “A Police Officers Prayer”, I will share it with you here:
“When I start my tour of duty, God, wherever crime may be; as I walk the darkened streets alone, let me be close to Thee. Please give me understanding with both the young and old. Let me listen with attention until their story’s told. Never let me make a judgment in a rash or callous way. But let me hold my patience, let each man have his say. Lord if some dark, dreary night, I must give my life; Lord with your everlasting love, protect my family and those in my life.” (Anonymous)