It had been a lush grass field on the outskirts of Gdansk before the war and then it became nearly one square mile of human suffering, mud, blood and shoes.

George Santayana wrote a first volume titled Reason in Common Sense, The Life of Reason and in it he made a statement that has been quoted and misquoted (more the latter than the former) since he penned it around the turn of the 20th Century. Santayana was born in Spain during the American Civil War and lived in America through the ‘Great War’  and WWII and died while the Korean War was raging. It is a curiosity as to how he would have sided in the Spanish-American War in 1898.

In his book, on page 284 in fact, is the quote: “Those who don’t remember the past are condemned to repeat it.” Perhaps it is appropriate that it is so often misquoted, since Santayana himself turned the phrase of Edmund Burke, a British philosopher who would have been about fifty years old at the time of the American Revolution. Burke was first to write: “Those who don’t know history are destined to repeat it.” There is a slight turn of phrase, not remembering the past as compared to not knowing history. I don’t think the two are inter-changeable particularly in this instance. Not knowing seems to indicate and ignorance of or indifference toward history. Not remembering the past has different  variables such as physically being unable to recall or being negligent in initially retaining the information.

Memories can be fickle things; clear one moment and as a wisp of air, gone the next. We can come to a point where we are not sure if our memories are actual records of events as they were or as we think they might have been. They may even be simply as we were told they were so repeatedly. I prefer to know something rather than remember it. One is solid the other vapor. Often, as I have left places, particularly in the Balkans or Eastern Europe; I have prayed that God would not permit me to forget what I have seen. I took to writing a travel log of sorts for my Balkan memories. It helps me to know my history there.

My very first visit to a “Concentration Camp”, better understood as Death Camps, this one,  Stutthof, is in Gdańsk Poland and was run by Hitler’s SS (secret police) rather than like the prisoner of war camps run by the Luftwaffe (air force). Each was horrific in their own ways. This, the first camp built outside of Germany was near the town of Skopje where Hitler kept a residence in the early part of the war following the Blitzkrieg of Poland. It was first run by the local chief of police from 1937 to 39 when in September it was transformed to a deportation center and  a re-education camp by the SS. Eventually, Stutthof  had some of the most brutal female guards in Third Reich (perhaps world) history.

There is mostly pristine grass fields and woodlands there now, just a couple of buildings and a gate to let you know where you are. A small memorial stands solemnly to the victims of this Satan’s lair. I trust I will not forget the shoes of Skopje. Taken from prisoners after their death, they are all sizes; many of them are women’s and children’s shoes, even tiny pinkish slippers the size for a toddler. One building houses nothing but the largest pile of discarded shoes I ever expect to see. Other than a small area for visitors to stand, the pile of shoes fills the building. In the center of the long building, the pile of shoes stands as a silent memorial from the floor to the ceiling. Estimates of the number murdered there are around 100,000 but most historians believe that to be a low number because those sent during the  final solution for immediate execution were never registered. Two things stand out in my mind. The first the most horrific, I think, that a small factory near the camp made soap from human bodies. How can one human being do that to another? The other is this solitary hangman’s post. The center of the camp as it is today in the background, the image is stark against the quiet backdrop. But not so in the days of Stutthof. Graphic images from the days of its liberation in May 1945 should be viewed by those determined not to forget, but to know history so we do not repeat it. 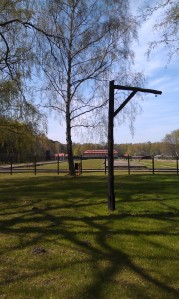 On the door frame of my home is a small olive wood box from Jerusalem with an inscription on the front depicting Romans 11. The passage describes new believers as grafted in to the tree that began as the Nation of Israel. Inside the small box is a scroll on which is the Shema passage that God instructed the Israelites to know and to pass down to the generations that followed them. They were to place them on their door posts and speak of them in their goings and comings, in their sitting down and rising up. Hear Oh Israel, the Lord our God, the Lord is One. Love the Lord your God with all your heart and all your soul and all your strength. I do not keep it there because of the commandment given to the Israelites in the days of Moses; I keep it there so I will not only remember, I will know. As I go out and as I come in, I am reminded again who is the reason for my hope.

We, as a people and particularly as Americans, need to know our history. We need to be reminded of why this country was founded and upon what and who it was founded. Do not ever say that what happened beginning in Gdańsk, Poland can never happen here. Remember, the first kommandant was the chief of police of the city whose full name was The Free City of Gdańsk. I do not believe that on one day the chief of police just woke up and said, ‘today I will start imprisoning my friends and neighbors.’  Records indicate that, before the camp began in 1937, that since at least 1936 the SS had been secretly creating dossiers on the locals. They gathered information on political enemies of the government. We must also remember that Adolf Hitler was elected to office.

Look past the hangman’s post and see the fresh grass growing green and new. It had been a lush grass field on the outskirts of Gdańsk before the war and then it became nearly one square mile of human suffering, mud, blood and shoes. Then, it became fresh, green and growing grass again. Gdańsk did not have to endure that interlude. Somewhere in the line of events, someone, some one, could have stood up and said No! Once it began, many tried to say, No, and they paid for it with their lives. But before that power was in place, somebody had the chance to say No! but they didn’t.

Sociologists and historians give us lots of reasons that Hitler was able to be elected and able to change his job title from Reich Chancellor of Germany  to Führer (father). We do know that a group of conservatives who understood the threats Hitler posed were loyal to President-for life Hindenburg. One, a vice-chancellor (Franz Von Papen) almost convinced Hindenburg to return the country to a constitutional monarchy. Hindenburg himself, dying at the age of 87 told Von Papen “…things are going badly, see what you can do.” Von Papen urged Hindenburg to put the declaration in his will that the country was to be returned to a constitutionally based monarchy. Rather than put it in his will, Hindenburg put the decree in a personal letter to Adolf Hitler. I wonder what Santayana thought.

I will leave you with this: first, there is hope… His Name is Jesus. Second, those who are unable to remember history must know history and be prepared to do whatever it takes to keep our society from repeating it.