However, there is a concern that Kim has backed himself into a fool’s corner by his determination for arbitrament by the sword and may be required to, as the colloquial saying explains it, ‘put up or shut up.’

Psalm 2:1-5 “Why do the heathen rage, and the people imagine a vain thing? The kings of the earth set themselves, and the rulers take counsel together, against the Lord, and against his anointed, saying, let us break their bands asunder and cast away their cords from us. He that sits in the heavens shall laugh and shall have them in derision. Then shall He speak to them in His wrath and vex them in His sore displeasure.” 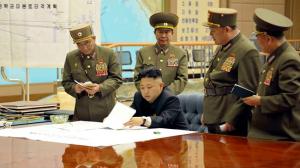 The passage from Psalm 2 is perhaps the most appropriate caption for this picture of North Korean dictator Kim Jong Un who ordered his country’s missiles to be aimed at Hawaii, Los Angeles, Austin Texas and Washington D.C. and in the next instance on March 29th declared that North Korea was in a State of War with South Korea. In part, the statement itself is redundant since North and South Korea have been only on a ‘cease fire’ or armistice since July 29, 1953. There never was a ‘winner’ in the Korean War however, Kim’s statement yesterday indicates his willingness to reconmmence hostilities. During the war in the 1950’s United Nations troops from across the world battled not only North Korean forces but Communist Chinese as well. Millions of Chinese troops did what the North Koreans could not and that was to hold the advance of the U.N. troops, led by the United States from entering and controlling North Korea. One must wonder whether China, although belligerent and at war with the U.S. already in a ‘cyber-warfare’ that is costing billions of dollars in losses; would be willing to enter into a shooting war with the U.S. and South Korea along with othe U.N. forces that may be required to fulfill their obligation under the armistice to protect South Korea from renewed military offensives.

The United States has maintained troops in South Korea specifically at the Demilitarized Zone since the armistice began. The 38th parallel has been the enforced ‘no-man’s land’ for 60 years as of July 27th of this year. The bellicose Kim appears once again to be ‘blowing smoke’ as far as his declaration that the missiles aimed at the U.S. would be “merciless” in their attack against the American people and his threats to reinvade South Korea. However, there is a concern that Kim has backed himself into a fool’s corner by his determination for arbitrament by the sword and may be required to, as the colloquial saying explains it,  ‘put up or shut up.’ To save face, he may very well act foolishly.

A large concern will be whether the Chinese once again come to the aid of their Communist neighbor and secondly, will Kim flex his nuclear muscle and bring with him his minion from Iran, Ahmadinejad?

Yesterday, B2 bombers based in Missouri flexed a little of the U.S. might as “the strategic stealth bombers flew from Whiteman Air Force Base in the U.S. state of Missouri to drop inert munitions on an island off the southwestern coast of the Korean peninsula before heading back to their home base – a 20,000 kilometer non-stop trip.”1

One can be certain that as tensions mount around Israel, as Syria continues to implode with all of the consequences that will bring for Israel; the fact that Christ is coming again soon is more obvious than ever. An exciting time to be about the Lord’s work as no doubt He will be calling many to Himself in these last days and Satan will be battling strong for every single soul. May we all geared up as Paul admonishes in Ephesians chapter 6 and best we all be ‘prayed up’ ready for battle. “Whom shall I send? Who will go for us?” Isaiah 6:8 – Let us answer with Isaiah, “Here I am Lord, Send Me!”