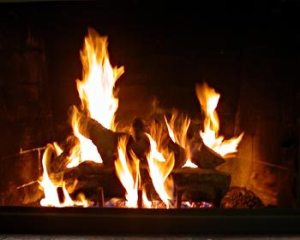 With the cold wind whistling across the top of the chimney, I carefully set the logs on the hearth so as not to awaken my wife nor the two dogs asleep in the next room. It was about 3:30 on a frigid January morning when I had the time to enjoy the warmth of a fire, the sound of its crackling and allow it to enter my thoughts. It had been busy week or two… it was so good though to see our son at Fort Benning and it was so good to have the occasion for my wife and I to spend some time away from the hectic work-a-day world and enjoy some sunshine.

As I allowed myself to be taken in by the fire, I realized that I had mistakenly seen my earlier disappointment with some circumstances in life as a result of something caused by either some action or inaction rather than seeing such disappointments as part of life. As I took in the flicker of the firelight against the stilled darkness, I thought of how many times God had allowed me to go from disappointment to the realization of some greater good that He had in store. I laughed at a memory that flashed into mind of the old adage, ‘when God closes a door, He opens a window’ and it was captioned under a frantic Noah mopping up rain water by an open window on the ark!

As I thought  through this recent disappointment, I tried to imagine how God might use it to open windows or doors; but more than that I wondered how those closest to us in our ministry world would see these changes. Would they be opportunities for growth or would it be a time of setback and redesigning the work? I have written before how the most common part of a missionary life seems to be change. There is constant change in location, in work, in partnerships, and in family. Certainly, there is a place upon which our decisions must stand and it is difficult to know that sometimes to move forward there must first come dramatic change. How often was that true of the lives of those in scripture?

As I sat in the dark, the firelight now blazing in the hearth, the wind from the chimney stilled by the heat of the fire, it was a perfect place to think, to allow oneself to go into a wonderful dream-state of times past. A lover of history, I found myself transported to  another century when the fireplace was the sole source of warmth and light and wondered if men like the great authors of those days were inspired by the ethereal world created by the battle between dark of night and the light of the warm fire. What would the day time bring? I had not heard from anyone concerning the coming changes, no inquires as to what might be next for us or how we saw the changes coming to be in some way God’s hand on our own ministry. I wondered there, as I sat watching what seemed like endless frozen snow falling through the dark sky outside, how these friends might see the future and I longed to hear from them to be assured that they felt the leading of the Holy Spirit along the path as we have. There is nothing more reassuring in the midst of change than to know that the Holy Spirit guides and directs each moment.

I immediately was reminded of the statement by Edward Cole, a character in “The Bucket List” as he reflected that our lives are “like smoke through a keyhole.” Even in scripture we read James’ letter where he says, “Yet you do not know what your life will be like tomorrow. You are just a vapor that appears for a little while and then vanishes away.” Another, much less biblical quote came from a character in the television series MASH, where Father Mulcahy concludes that “It doesn’t matter whether you feel useful or not when you’re moving from one disaster to another. The trick, I guess, (he says) is to just keep moving.” In some ways those can all seem to be defeatist attitudes, perhaps. Maybe in James we see a warning, but better still, with James we can see, too,  the excitement of the unknown, the not yet attained. Father Mulcahy is moving from one disaster to another in his crazy world of war and perhaps in war, you just keep moving. In life, there are times to consider the brevity of life, like the psalmist who asks God to help him ‘number his days, so he might gain wisdom.’ There are times when you can consider the tomorrows not yet visible and imagine the ‘what might be.’ In this same chair by this same fireplace, I have held my grandchildren and looked into their eyes as they stare up at mine. It is as if I can see beyond their eyes; into their future and imagine all the days that have not yet been but will be.

As if transported to the world of Dickens in 17th century London, spirits of the past and present give way to the future. In the case of poor Scrooge, his fear of the future gives way at last to the resilience of the present, of life, of hope of love that comes only from God. Though through Dickens we never hear old Scrooge speak of his faith in a higher, eternal creator God or in the salvation through the one for whom Christmas is made; but Dickens tells us that: ‘And it was always said of him that he knew how to keep Christmas well if any man alive possessed the knowledge.’

This past week just before we headed for Georgia I had time to visit my friend in the hospital. A quadriplegic bound to a respirator, my friend is barely able to communicate. He assured me that he was ready for death, he knew that heaven would be his home. And then, he did something he had not done before in any of our visits. I knew that his body was winding down and his time was short and somehow too, so did he. When I told him that I would be back from Georgia on Monday night, he caught my gaze and while intently looking in my eye he mouthed, “Good bye.” I learned, while I was away, that it was goodbye for he had slipped the chains of his mortal body that would not work and flew to heaven where he is enjoying his new home. He told me once that he wasn’t mad at God for what had happened to him. He said he ‘couldn’t be.’ I began to wonder, as I watched the fire slowly fade to glowing embers even as the sun began to slide up over the frozen trees to the East, what my friend would have told me about the changes coming in mine and my wife’s ministry. I think he would have said something like, “Do what you must, give lots of grace, mind others’ hurts more than your own and trust.”

All of the time I knew my friend he was a prisoner of his own body in that same hospital bed. I also knew that he gave more encouragement to those who visited than anyone could imagine. He was so keenly interested in the well being of those who came to see him so much more than whatever he was going through. In that way, he reminds me of my wife’s grandfather, the most brilliant man I probably will ever know. He was always more interested in learning all about how I was doing and what I was doing in and with my life; totally absorbed in whatever I had to say as if I was the most important person he had ever met, and he had met some biggies!  Jesus was a lot like that. I pictured Zacchaeus who climbed the tree to catch a glimpse of the Savior. The Savior would know where to look for him and to prepare to enter and change Zacchaeus’ life  forever. At that moment, for Christ, he was the focus of all of God’s attention.

Night has shifted into morning. The logs on the fire now nothing but ashes, their form spent to create for me the heat and light and inspiration I desired. The fire now has gone and the air has cooled. Change. It is more than part of life, it is part of who we are. A line that my son has chosen by which to help guide his life, Deus Vult – As God Wills.