By trying to merge two theologies, the Progressives have lost the essence of each particularly in the dispensational theology the understanding of the Bible as being without error (in the original manuscripts) and interpreting the Bible historically, grammatically and literally.

Riggs Ministry Minute: when there’s only a minute for ministry

From the breaking out of our shell in the 1950’s and as we ‘Baby-Boomers’ (at least that is what they call us) listened to President John F. Kennedy offering a challenge that: before the end of the decade, America would land a man on the surface of the moon; we knew what progress was all about! Everything from our breakfast cereal and laundry detergent somehow was part of progress. I recall this hair drying contraption my Mom brought home. This thing had a heating unit that blew hot air through a flexible hose into a plastic shower cap worn over your hair. It would either dry your hair or cook your brain. If you recall the commercial of the egg frying, “This is your brain… ”; this contraption was designed to keep your ‘over-easy’ brain warm before there were microwaves. (I think she got it with TV-Stamps.)

There was true progress, however. America did land Neal Armstrong on the moon one historic July day. Yes, America won the ‘space race’ on President Kennedy’s calendar requirement: before the end of the decade with that July day coming in 1969. In many ways the decade of the 60’s contained a great deal of progress.

Grammatically speaking, if one is supportive of progress, he or she is progressive. Merriam-Webster writes that to be progressive is to be “characterized by progress”[i] as such is the use of the term as an adjective. There is, however, a use of the term that is characterized by the noun: progressive. Merriam-Webster defines it this way: “often capitalized, of, or relating to political Progressives.”[ii]  There is something about a noun that, when used by an individual, it seems to infer that if one calls themselves a Progressive then their views support or sustains progress. Logically, however, just because sometimes A+B=C, it is not always true A+B=D. The confusion comes when supporters of ‘D’ work very hard to present D as equal to C. Many parts of the 1960’s were presented as progressive like the free-thinking flower-children with communal living and casual open sex but it was not progress.

Dispensationalist refers to Christians who understand the inter-relationship between God and man as having been different at different times or different dispensations of time. The focus always is to reveal the glory of God. The number of dispensations may vary by one or two but for the most part, there are seven periods of time or distinctive eras wherein God related to His creation in distinct ways. One example is at the completion of the covenant with Abraham, God related to Israel through this covenant. The dispensation is called simply: PROMISE.  Promise indicates that the people lived in the hope of the promises made in the covenant relationship by God with His chosen people. (See chart[iii])

Covenant Theology speaks of two covenants rather than seven dispensations, with believers living in Old Testament times as living under the Covenant best described as Works and current believers under the ‘New Covenant’ described as Grace. The key issue between a Dispensationalist and a follower of Covenants is how they view Israel within their theology. The covenant theologian tells you that the ‘church’ (believers in Jesus Christ) has replaced Israel and is now the beneficiaries of the promises God made originally to Israel but since the nation rejected Christ, those promised blessings come to Christians under the New Covenant. The central focus is the salvation of man rather than the glory of God.

Progressive Dispensationalists diverge from Traditional Dispensationalists when they merge the ideas shown in the previous chart with the teachings of covenant theologians. Their moniker, ‘Progressive Dispensationalist’ is a noun seeking to be an adjective or perhaps it is an adjective seeking to be a noun. A ‘Progressive’ believes that Christians (the Church) has superseded Israel as the ‘chosen people of God’ because Israel rejected Christ and the Church now will receive all the blessings prophesied to Israel in the Old Testament (land acquisition, coming glory etc.) Most will say that someday Israel will be re—joined and receive some blessing but this is in eternity future. By trying to merge two theologies, the Progressives have lost the essence of each particularly in the dispensational theology the understanding of the Bible as being without error (in the original manuscripts) and interpreting the Bible historically, grammatically and literally. Although they might argue they can still interpret with those parameters this cannot be true if they see an error on the part of OT prophets who spoke of the blessings for Israel that cannot be abrogated. They also must sacrifice ‘literally’ because they are replacing Israel with Church in promises that have nothing to do with the Church. Historical interpretation falls to the wayside when biblical text referring to Christ reigning from the throne of David over the New Jerusalem is said to have already begun. To do so requires reading the New Testament back into the Old Testament to gain a ‘fuller’ meaning. Dispensationalists see this in the Millennial Kingdom. The Progressive Dispensationalist understands the Rapture of the Church to be pre-millennial or before the beginning of Christ’s 1,000 year reign on earth before a new earth is created. The timing of the rapture as it relates to the Tribulation (a seven year period of intense judgment on the earth) vacillates with some holding to ‘pre-tribulation’ others ‘mid-tribulation’ and finally, others at ‘post-tribulation.’ They see no eschatological requirement for the time of the Rapture as it relates to the Tribulation to be of any consequence. The following chart is instructive: 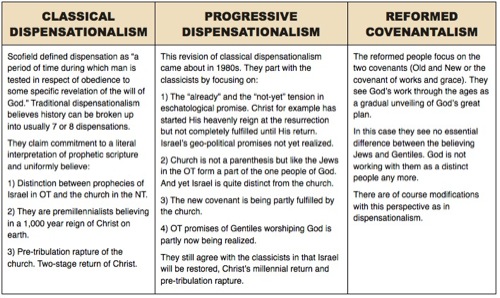 Although the Foundations for Freedom charts are instructive, you’ll note that this chart shows that the Progressives hold, as a group, to the pre-tribulation Rapture. That varies based on individual beliefs but overall the writings from most Progressives simply do not put much emphasis on its importance no matter when it happens. This creates problems when literally developing the message of Revelation for the Church in heaven during the tribulation on earth.

Progressive Dispensationalism has taken the adjective to underscore the link its adherents see to the progressive revelation of God, bringing together the ‘best’ of the Covenant Theology and the Dispensational Theology. When we consider progress, in this instance perhaps the best definition is “The development of an individual or society in a direction considered more beneficial than and superior to the previous level.”[v] In this case with this definition I fail to see how the creation of this new Bible study technique or this new theology moves hermeneutics in a direction more beneficial and/or superior to the previous level. Allow me to quote Dr. Charles Ryrie on Dispensationalism[vi]:

“Dispensationalism holds to a distinction between Israel and the Church.”

By merging the promises and blessings reserved for Israel, Progressive Dispensationalism blurs this distinction.

“Dispensationalism practices consistent literal interpretation of the Bible. Prophetic passages are to be interpreted like the rest of the Bible following a grammatical-historical approach.”

By reading NT texts back into the OT prophecies to cause them to say something the original author could not have intended them to say, Progressive Dispensationalism sets aside the grammatical-historical approach.

“Dispensationalism teaches that the overall purpose of biblical history is the glory of God, not the salvation of man.”

Again, by merging with Covenant Theology which focuses on the salvation of man (election) as the key to understanding God’s revelation of Himself, the Progressive Dispensationalists loose the focus of Dispensationalism.

It is apparent that the ‘new’ has not brought us to a better place from whence it was that we first ventured forth and as far as this author is concerned it has failed to meet the standard definition for progress. Does it enhance the progressive unfolding of God’s revelation of Himself or does it recycle older ideas in new packaging? Progressive… perhaps we are not as advanced as we have come to believe that we are?